Here are my ‘top 3’ suggestions on where to start your Chinese Australian history.

(Note: these suggestions are most relevant for New South Wales, and for tracing Chinese ancestors who arrived in Australia from south China before World War II.) 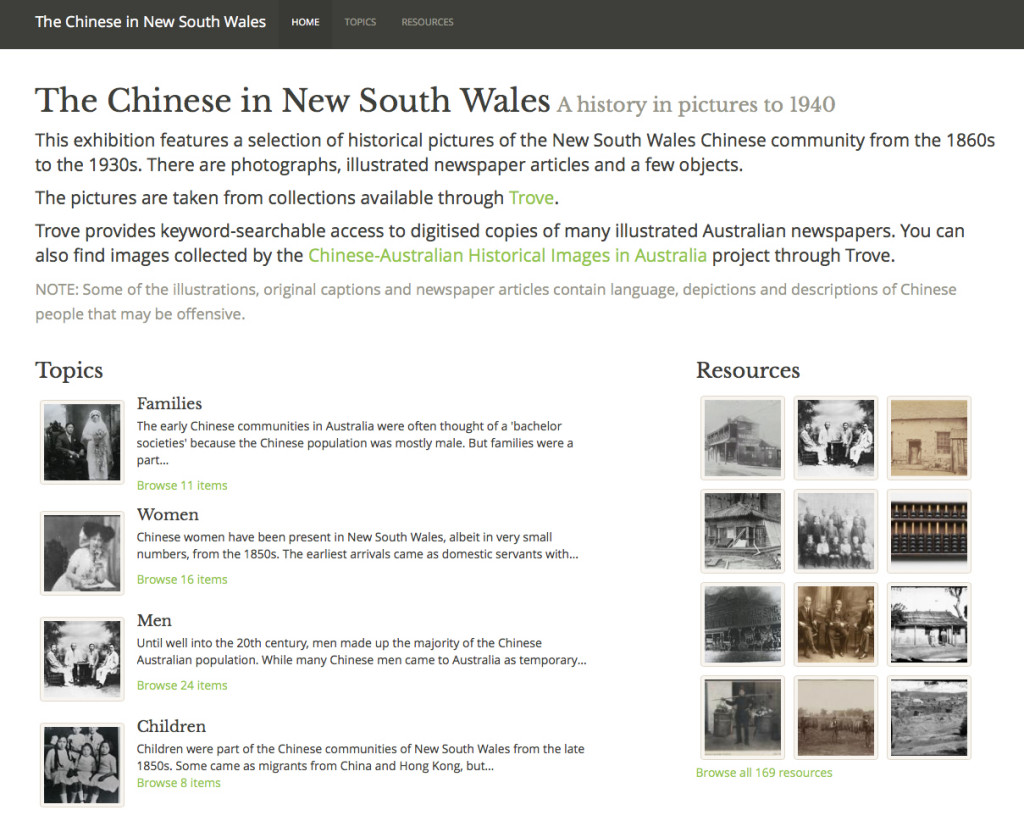 The list feature in Trove allows registered users to create their own collections of items. They’re a handy thing if you’re researching a particular topic and want to organise the material that you’ve found in Trove, or even if you just want to go back to random stuff that you like. You can keep your Trove lists private, or make them public and share what you’ve found with others.

Tim, who until recently was part of the Trove management team, thought that it would be good to take that sharing to another level — so he’s created a framework that lets you use your Trove lists to create an online exhibition. You can read more about Tim’s thoughts on this process on his blog.

I was keen to give it a try, and decided to make a pictorial exhibition about the Chinese in New South Wales to 1940. I started by making nine lists in Trove, which would serve as topics in my exhibition. Gradually I added a selection of pictures, objects and illustrated newspapers articles to each of my lists. I gave each of my lists a short description and arranged the items in chronological order. Because I’ve included newspaper articles, it would be best if I took the time to correct the OCR text for each one, but I’m impatient and wanted to get onto building the exhibition itself.

Tim’s DIY Trove Exhibition is pretty straightforward to use, particularly if you have some experience (even very basic experience) with web publishing or coding. He’s written clear, step-by-step instructions. The process first involves getting yourself a GitHub account and a Trove API key, and then customising his code to make your exhibition. Customising the code might look scary, but if you follow the instructions carefully you should be okay! There are further ways that you can customise the exhibition — for example, I changed the fonts — but you don’t need to do anything more if you don’t want to.

Once you’ve made the exhibition, you can easily add or take away items, or change your list descriptions, or change the order items appear in a list. Simply make the change to your list in Trove and it will appear in your exhibition after refreshing your browser.

The Chinese in New South Wales: A history in pictures to 1940

The village of Shiquli in Luokeng, Xinhui (新會區羅坑鎮和平村石渠里) sits at the heart of one of my ongoing research projects. Victorian-born James Minahan (1876-?) spent more than twenty-five years in Shiquli, from the age of about five to thirty-one, when he returned to Australia. Arrested as a prohibited immigrant after failing the Dictation Test on his arrival in early 1908, his case proceeded to the High Court (Potter v. Minahan 1908) and he was eventually granted permission to stay in Australia. Whether he did or not I still don’t know, even after exhausting every lead I have found in the archives in Australia and now visiting Shiquli for a third time.

While I might not yet have uncovered James Minahan’s fate, I have discovered that the tiny village of Shiquli sent dozens of men to Australia from the 1860s into the twentieth century. The earliest were gold-miners, with some becoming storekeepers, but many in later years were simply gardeners. While I was in Shiquli last Saturday, we found a poignant piece of material heritage that reflects this history.

Stashed away in a shed next to one of the few huaqiao houses in the village — the house of Chen Zhidian 陳稙典 (pronounced Tsun Zek Din in Xinhui dialect), built on his return to the village in 1948 (22°27’08.14″N 112°55’47.93″E) — was an old shovel that was said to have been brought back from Australia many years before. Once the dirt and a bit of the rust was cleaned off, I could just make out the words SAVAGE and SYDNEY underneath an insignia of a six-pointed star in a circle. Bingo!

The shovel has now been acquired by the fine gentlemen of the Kong Chew Chan Clan Culture Research Association (岡州陳氏文化研究會), with whom I was visiting the village, who plan to treasure it appropriately. I promised to find out what I could about the shovel’s origins, so this post is a brief outline of what I’ve been able to find out online from China (honestly, what would we do without Trove?).

W. Savage & Co., the manufacturers of the shovel, were originally based in Newcastle, New South Wales. In 1926, a notice was published in Sydney’s Daily Commercial News that a new company, W. Savage & Co., had been registered to acquire the business of W. Savage & Co. at Newcastle. The company were wholesale and retail storekeepers, general merchants, ironmongers and engineers (Daily Commercial News, 12 January 1926). In the late 1920s the company was the Newcastle agent for a range of building and hardware products and machinery, including:

W. Savage & Co.’s involvement in shovel manufacturing began in mid-1928 when they set up a new factory at their premises in Parry Street, Cook’s Hill, Newcastle (Newcastle Sun, 2 July 1928).

A Mr Gaythwaite, ‘an experienced shovel-maker from Cumberland, England’ had, a number of years earlier, come up with a new design for a shovel which he patented under the name ‘Gaylac’. The shovel had corrugations on either side of the handle that were said to strengthen the shovel across the back of the blade and counteract leverage stress. Gaythwaite began manufacturing the shovels in partnership with a Mr Black in around 1926, just in their spare time, and distributing them in the Cessnock and Kurri Kurri districts in the Hunter Valley.

The shovels were made in Australia from entirely Australian materials — the billets were made by BHP and rolled by Lysaght’s into sheets from which the shovels were cut. They were then pressed into shape with a machine, tempered in an oil bath, and set and balanced by hand.

By the end of 1931, W. Savage & Co. was based in Sydney. In December that year they were in court arguing over the rent they could charge for the commercial premises they still owned in Parry Street, Newcastle (Newcastle Morning Herald, 23 December 1931). These premises had been for sale in mid-1930 and it seems likely that this was when W. Savage & Co. relocated to Sydney. The business was one of several in Parry Street that were broken into in August 1929 (Newcastle Sun, 24 August 1929), at which time a safe in the W. Savage & Co. offices was blown open and cash and a cheque were stolen.

W. Savage & Co.’s move to Sydney came around the time of the Great Depression (1929-1932), and it seems that it was after the difficult times of the depression that things took off. There aren’t any advertisements or articles about the company in the newspapers between 1929 and 1932.

In 1934 and 1935, Savage & Co. appeared before the Industrial Commission in a dispute over wages for two ironmongers they employed to manufacture shovels using a ‘specialised process’ (Sydney Morning Herald, 27 September 1924, 26 February 1935, 27 February 1935).

By the mid-1930s, the shovels were no longer being advertised as ‘Gaylac-Star’ shovels, but simply as ‘Star’ shovels, part of an expanding range of ‘Star’ products that included forks, scoops and spades. Their high quality was said to come from ‘years of experience in the heat treatment of the best quality Steels — the usage of first grade Handles — and the employment of highly skilled artisans’ (Newcastle Morning Herald, 12 October 1935).

In 1940 a fire broke out in the George Street factory caused by a burst oil pipe leading to the furnace. Twelve employees escaped from the fire, but overhead pulleys and other machinery were damaged (Sydney Morning Herald, 18 October 1940).

The National Museum of Australia in Canberra has a Star shovel in its collection. It is part of the Claude Dunshea collection (who seems to have been a miner, judging from other items of his in the museum’s collection). The museum’s shovel has a very short handle, while the one in Shiquli has a long handle as shown in the 1930s advertisements.

Early on Christmas morning 1879, the residents of Lambie Street, Cooma, received a visit from their neighbour, Jimmy. With a Christmas greeting, he presented them each with a dish of new potatoes and a piece of prime pork, products of his Lambie Street market garden (Manaro Mercury, 31 December 1879). From childhood I’ve loved the sense of history that Lambie Street exudes, with its iron-roofed stone and brick cottages and their snug verandahs. It was Cooma’s first street and Jimmy’s garden would have sat on the low side of the road, an area that ran down to the creek and was subject to flooding.

Jimmy’s small act of Christmas cheer was repeated over and again by Chinese hawkers, gardeners and storekeepers around the Australian colonies. European businesses also made gifts of a ‘Christmas box’ to their customers, but the generosity of the Chinese at Christmas was something that lingered well into the twentieth century, continuing on after European traders abandoned the practice. The memory of the Chinese Christmas box lingered even longer. A 1937 article reminiscing about the early days of the Tambaroora goldfield remembered the prosperity of the Chinese stores of Sam Choy, On Ti Kee, Sam Gon Shin and Ah Tye, achieved through the regular custom of the white population. ‘Perhaps it was the never failing Christmas box forthcoming at the Chinese stores that attracted a certain amount of patronage from the whites’, the article suggested somewhat unkindly. White women dealt regularly with the Chinese, particularly with the hawkers who brought high-quality fresh fruit and vegetables to their door each day, and a number of illustrations from the newspapers and journals of the time depicted their congenial Christmastime meetings.

The Chinese were best known for their gifts of jars of preserved ginger; it was ‘the very best of its kind, and as such [was] a very acceptable addition to the Christmas Day dessert’ (Newcastle Morning Herald, 28 December 1908). Others like Jimmy of Lambie Street presented customers with fresh produce or nuts, fans or handkerchiefs. In 1917, the civic-minded Chinese gardeners and fruit hawkers of Wagga even presented the district hospital with a cheque for £14/10/ instead of giving their usual Christmas boxes to their customers (Albury Banner, 14 December 1917).