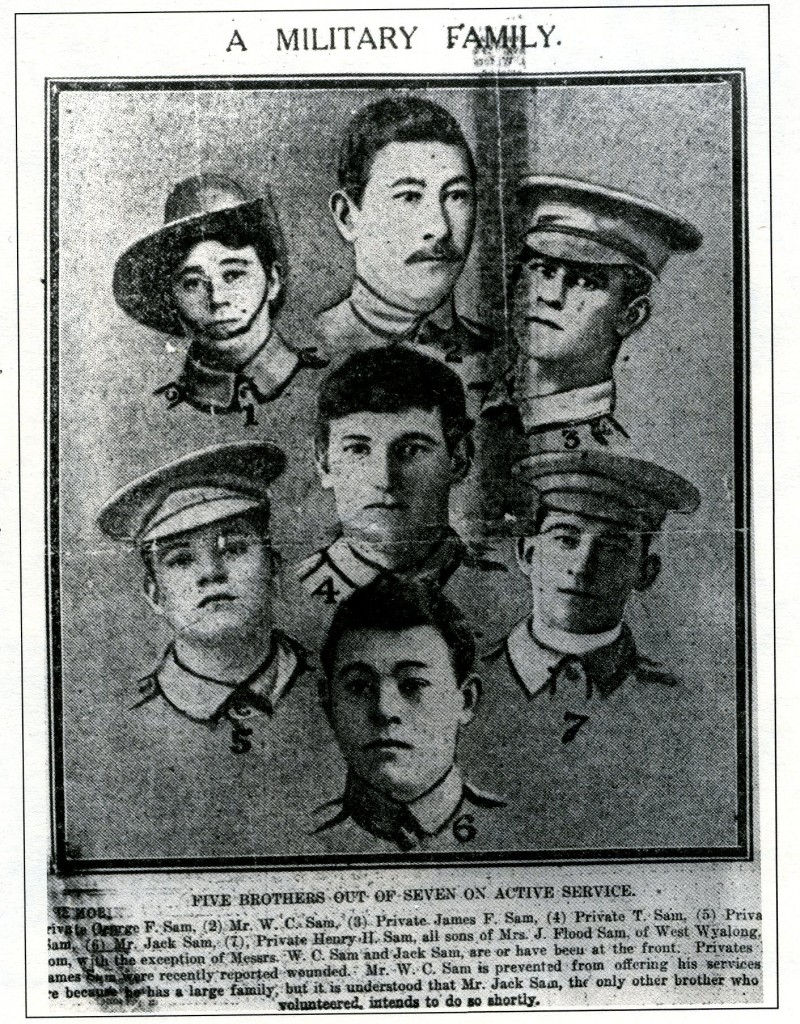 The next event from the Chinese Australian Historical Society is a talk from Alistair Kennedy, BA (Hons) MA Dip Ch (HK), MBE from the School of History, ANU.

This paper represents work in progress on Alistair’s PhD thesis. It examines how the experience of war service in the First Australian Imperial Force (1st AIF) affected the lives of Chinese-Australians. It covers the consequences of the 1901 Immigration Restriction Act, the Dictation Test and the white working class exclusion discrimination on Chinese workers. The Chinese-Australian population fell rapidly from more than 88,000 in the 1880s to 25,000 at the 1911 census. In 1914, there were fewer than 2,000 Chinese-Australian males of military age with British citizenship and, of these, the racially intolerant Defence Acts excluded many who could not prove they were of ‘substantially European origin or descent’. Yet many of these Chinese-Australians did enlist.

Apart from the indigenous peoples, Australian social historians have seldom examined White Australia’s treatment of ethnic minorities between the wars. This paper argues that for one such minority, Chinese-Australians, the experience of military service in World War 1 was a positive one.

The story of Chinese Australian Victor Lepp of Ballarat (mentioned briefly in the previous post) will be featured in Not Forgotten, a documentary to be shown on SBS TV at 8.30pm on Remembrance Day, 11 November 2008. Read more in the Courier.

A guest post in honour of the 90th anniversary of the Armistice that ended World War I. Alastair Kennedy, who is undertaking a PhD at the Australian National University, shares with us some of the experiences of Chinese Australians who served in World War I.

Due both to the accident of its colonial history and the deliberate imposition of the White Australia Policy after Federation, the First Australian Imperial Force (1st AIF) that set out for Egypt in the troop transports from Australia’s west coast ports in 1915 was predominantly of white European stock. It was a requirement under federal regulations, in force from 1910, that members of the permanent and citizens forces were to be ‘substantially of European origin or descent’.

Yet, despite this and the other discriminatory legislation, Australians of Chinese descent did enlist and served with distinction during World War I. Based on an analysis of the 1911 census it has been estimated that there were less than 2000 full- and part-Chinese Australian males eligible to enlist. Using known Chinese surnames and building on information from Gilbert Jan’s 1999 Sydney Memorial Honour Roll, the 2003 Chinese Heritage of Australia Federation Project’s database compiled by La Trobe University and information supplied by the Golden Dragon Museum in Ballarat, I have so far identified in the records of the Australian War Memorial and National Archives of Australia some 197 diggers of certain Chinese ancestry who served in the 1st AIF.

Between them, these Chinese Australians were awarded five Distinguished Conduct Medals (DCM), fourteen Military Medals (MM), two Belgian Croix de Guerre and three Mentions in Dispatches (MID). In proportion to their numbers, this represents a much higher ratio of gallantry awards per head than the rest of the AIF.

There are many names that already feature in Chinese Australian history; for example, Herbert Kong Meng (21), Arthur Quong Tart (3262) and Christopher Shying (3232), respectively descendants of the more famous Lowe Kong Meng, Mei Quong Tart and John Joseph Shying (who himself had served with the New South Wales Volunteer Rifles in the Sudan Expeditionary Force).

Here are some other 1st AIF Chinese Australian heroes.

Caleb Shang was the most decorated Australian of Chinese descent in World War I. He was born in Fortitude Valley, Brisbane, in 1884 to Lee Wah Shang, a cabinet-maker, and Jane nee Noon of Gayndah, the eldest of 13 children. His unit was in action at the Messines Ridge and he was awarded the Distinguished Conduct Medal for bravery. Just over a year later Shang, now serving in the 45th Battalion, was awarded both a Bar to his DCM (in effect earning the same medal twice) and the Military Medal for his actions at Dernancourt on the Somme. His brother Sidney also served.

Featured in John Hamilton’s recent book Gallipoli Sniper (Pan Macmillan, 2008), Trooper Billy Sing of the 5th Light Horse was born in Clermont, Queensland. He had worked in the bush as a stockman and was both a skilled horseman and a crack shot. In May 1915 his unit embarked for Gallipoli where he started to earn a reputation as a sniper. In December 1915 the Army Corps Commander published a paragraph in Army Orders congratulating Billy on ‘performing his duty at a sniper post’ and ‘accounting for 201 casualties to the enemy’. This was followed by the award of the Distinguished Conduct Medal. Later, in France he was wounded twice (once at Polygon Wood) and was Mentioned in Dispatches for gallantry and awarded the Belgian Croix de Guerre.

Leslie Kew-Ming was born in St Arnaud, Victoria. He served with 23 Battalion in Belgium, was wounded in action and awarded the Military Medal.

William Loo Long was born in Marsden, NSW. He served with 45 Battalion where he earned his first Military Medal in April 1918 at Dernacourt in France. Later, during operations East of Hamel, he earned a Bar to his MM (in effect a second MM). His brother George Thomas Loo Long also served.

Five of the seven sons in the Sam family from West Wyalong served in the AIF. Four of the brothers were Sergeant George Flood Sam (2671) MM, Henry Herbert (676), James Francis (1431) and Norman (1430). The fifth brother appears not to have enlisted under the name ‘Sam’ (or any variation of that), and his service record hasn’t been located.

All four brothers in the Langtipp family of Port Albert joined the 4th Regimentt Light Horse – each returned safely to Australia, one with a Distinguished Conduct Medal. They were Bertie Allan (2346), Ernest Walter (2345), Henry (2347) and Leslie Oliver (2348) DCM.

I am sure there are many other Chinese Australians who enlisted in the 1st AIF under assumed or Anglicised names. If anyone who reads this has such an ancestor or knows of someone who has, I would be delighted to research them at no cost and provide them with the results. Please help!

A note on World War I service records

Service dossiers for men and women who served in the 1st AIF are held by the National Archives of Australia in Canberra. Most of the files have been digitised and are available to view online. The Archives’ website has general information about the service records and how to access them. You can do a search by name using NameSearch.

A new website from the National Archives, called Mapping our Anzacs, provides a different way of accessing the records. With Mapping our Anzacs you can browse maps to see where World War I servicemen and women were born and enlisted. You can also post comments or photographs about individual service people, or create a tribute about people that are important to you. The links above to Alastair’s Chinese Australian servicemen go to their details in Mapping our Anzacs.

Here are some other sites that might be helpful in finding out about World War I service men and women: