This interesting advertisement by ‘Ah Kow’ of Binalong, in the southern tablelands of New South Wales, appeared in the Murrumburrah Signal on 7 May 1884.*

Binalong is a pretty village about 35 kilometres north-west of Yass. In the 1850s and 1860s it was an important staging post for the Cobb & Co. coach heading to the goldfields at Lambing Flat (Young), about 60 kilometres away.

Digitised historical newspapers don’t reveal much about the Chinese who were living at Binalong in the 1880s, when Ah Kow was resident there, even though it was said in 1883 that their numbers were ‘getting very numerous’ (Southern Argus, 18 January 1883, p. 2). The 1891 census recorded only 8 Chinese at Yass and 8 at Boorowa, although there were 46 at Young. In Binalong the Chinese seem mostly to have been working as gardeners.

What then of Ah Kow’s search for a wife? There don’t appear to be any other obvious reports about him in the papers – certainly none identified in Robyn Atherton’s book* or that I’ve spotted in Trove – and I can find no marriage or birth registrations that might suggest Ah Kow was lucky in love, either.

There is, however, a newspaper report of a woman named Annie Ah Kow who came before the Yass police court in June 1884 for being drunk and disorderly (Yass News, 28 June 1884, p. 2). Having been before the courts previously on charges of drunkenness, Annie Ah Kow doesn’t seem to fit with Ah Kow’s requirements for a ‘nice, clean, quiet young woman’. But perhaps Annie and Ah Kow had lived together then gone their separate ways, prompting Ah Kow to look for a different kind of woman to share his life?

The following year, a similar advertisement appeared in the same newspaper. This time it was ‘Ah How’ of Cootamundra who thought he’d try his luck by advertising for a wife. The Goulburn Evening Penny Post reported on the ad on 4 August 1885, saying:

A Chinaman Seeks a Wife.

The following curious advertisement appeared in the Murrumburrah Signal:—Matrimony.—Ah How, aged 30 years, would like to take a partner for life. The lady’s age is of no consequence—but he would prefer one between 15 and 50—and she may belong to any religion under the sun. She must, however, be a good housewife,—clean, able to wash, cook, &c., as well as sober in her habits. Apply by letter, to Ah How, Post Office, Cootamundra.

Cootamundra is about 70 kilometres from Binalong, with Murrumburrah being about half way between the two. Was Ah How inspired by Ah Kow’s ingenuity, or were they the same man?

References to Ah How, a gardener at Cootamundra, suggest that he was resident there by the mid-1880s. In September 1886 Willie Ah How applied to lease five acres for a garden in Cootamundra, which was granted in 1887 (Wagga Wagga Advertiser, 6 October 1887, p. 3). In 1893, he and three other Chinese were listed on the Municipal Roll for Cootamundra (Cootamundra Herald, 8 February 1893, p. 4). No obvious marriage or birth registrations appear under the name Ah How at Cootamundra or nearby, and Willie Ah How died intestate at Cootamundra in 1906 (Government Gazette, 30 May 1906, p. 3208).

Over a decade ago one of the most useful tools for Chinese Australian history research was developed as part of the Chinese Heritage of Australian Federation project – an English-language index to two of Australia’s early Chinese-language newspapers, the Tung Wah Times and the Tung Wah News. For someone like me, whose Chinese reading comprehension skills were rudimentary at best, the index meant there was some practical way to find relevant material in the newspapers. Articles I located, for example, provided evidence of Chinese Australian attitudes towards intermarriage between Chinese men and non-Chinese women, something that was difficult to ascertain from other sources.

My best find was an article that related to a story I was told during fieldwork in Taishan in 2003. The story told of how foreign wives of Chinese men would give their husbands doses of poison before they made a return visit to China, a poison that could be reversed only if the man returned overseas to his foreign wife within a particular time for the antidote. My informant stated that this was the cause of the death of his uncle, who had been a laundryman in Cuba in the 1920s and was known to have had a Cuban wife. The article in the Tung Wah News provided a second example of this same story, suggesting that it was an urban myth of sorts among the qiaoxiang villages.

Unfortunately, with time the Chinese Heritage of Australian Federation website, and the Tung Wah index with it, could no longer be maintained and it was archived by La Trobe University. The index lost functionality in this process, meaning that searches no longer worked and only a certain number of items in the index were browsable.

Which brings me to the point of this post.

Thanks to the hard work of Sophie Couchman and Tim Sherratt, the Tung Wah Newspaper Index has been redeveloped and a sparkly new version is now up and running. The index can be searched or browsed, as you’d expect. But Tim has also made sure the index includes Linked Open Data and a basic API and has made the code and data available on Github. 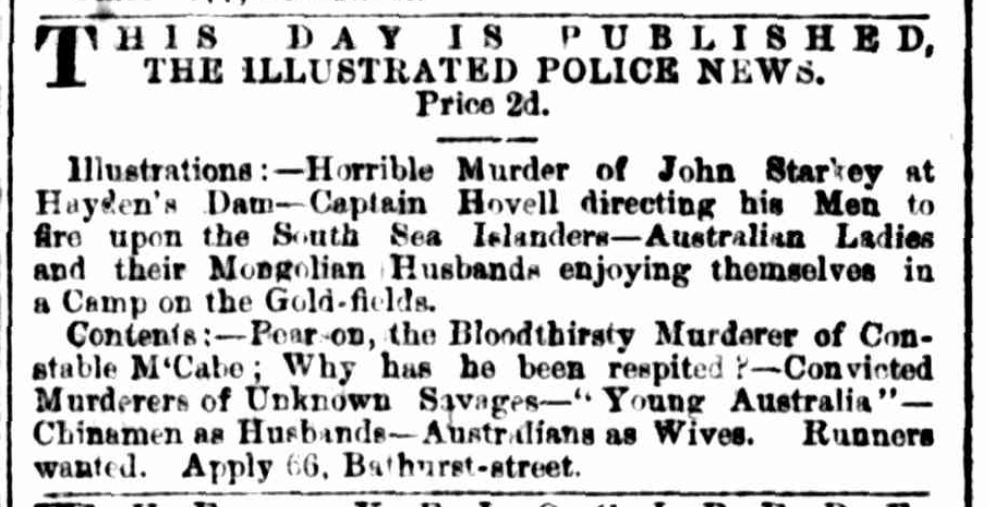