Well fancy that! The nice folk at the National Library of Australia have decided that this little blog is worth preserving for posterity in Pandora. 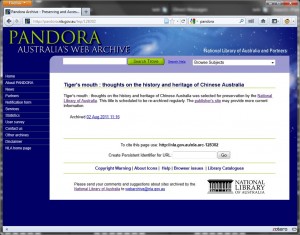 The Canberra Times this morning is reporting the destruction of an 1850s building that was once used by the Chinese family, the Nomchongs. The single-storey wooden building stood in the main street of heritage-listed Braidwood, near Canberra and was demolished apparently in error. The Canberra Times says that the demolition was approved by the local Palerang Council, but there had been a mix-up over the address of the building.

The Nomchong brothers first settled in Braidwood in the 1860s–70s, and the descendants of one of the brothers still live and run businesses in the town today. The first Nomchong in the Braidwood area was Sheong Foon Nomchong (his name was spelt in a range of ways), who established a business at Mongarlowe and then Braidwood, and married Ellen Lupton, a woman of Irish-English descent. As his business grew he called for his brother Chee Doc to come to Australia from California. It is Chee Doc’s descendants who remain in the area today.

More on the Nomchong family:

Golden Threads also lists objects and sites associated with the Nomchong family in the Braidwood area.

The National Library of Australia holds the Nomchong family photograph collection (PIC/7659), the photographs from which are digitised and can be viewed online. The NLA also has oral history interviews with Nomchong family members.

The National Archives of Australia has a range of records about various members of the Nomchong family, including war service records, naturalisation applications and files relating to migration to Australia and travel out of Australia. Some of these can be found in the RecordSearch database by doing a keyword search for ‘nom chong’ or ‘nomchong’.

The Braidwood Historical Society has a collection of Nomchong family material, including the ‘Nomchong Room’ at the Braidwood Museum (Wallace Street, Braidwood).

And more generally on the history of the Chinese, including the Nomchongs, in the Braidwood area, see the extensive work of Dr Barry McGowan.

If 8 August 2008 is an auspicious enough day for the opening of the 2008 Beijing Olympics, then surely it’s also a good day on which to launch this, my new blog about Chinese Australian history and heritage. And given the current obsession with things Chinese and things Olympic, it seems fitting to begin with a post about a Chinese Australian teenager’s lasting impact on the traditions of the Olympic Games.

The Olympics of 1956 were held in Melbourne – a great coup for our little nation – but international political events threatened the success of the Games before they had even started. The Soviet invasion of Hungary lead to the withdrawal of Switzerland, the Netherlands and Spain; Egypt, Iraq and Lebanon pulled out over the Suez Crisis; and at the last minute the People’s Republic of China refused to attend because the Republic of China was being permitted to compete under the name Formosa. These international tensions continued during the Games, most famously during a water polo match between Hungary and the Soviet Union which came to be known as the ‘blood in the water’ match.

While these events were worrying for Olympic officials, they were also playing on the mind of a 17-year-old Melbourne boy, John Ian Wing. Wing decided that something needed to be done to turn things around, and so wrote to the Olympic committee with a suggestion he hoped would bring the athletes together in a show of unity and harmony.

Wing’s two-and-a-half page handwritten letter, now held by the National Library of Australia, outlined his proposal for a closing ceremony march in which the athletes did not march in their national teams, but rather walked together freely, smiling and waving at the crowd. ‘War, politics and nationality will be all forgotten, what more could anybody want, if the whole world could be made as one nation’, he wrote. Wanting to make a difference, but too shy to even tell his family what he’d done, Wing only signed the letter with an indecipherable ‘John Ian’. The only clue he provided as to his identity was to reveal that he was 17 years old and ‘a Chinese boy’.

Wilfred Kent Hughes, chairman of the Olympic organising committee, was enthusiastic about Wing’s idea and after getting IOC approval, put plans for the march into action. Kept secret until the end, the march was a great success and as one newspaper of the day said, ‘It delighted 100,000 people in the Stadium and probably changed the form of all future Olympic closing ceremonies’. Wing didn’t attend the ceremony, and it was only when the Monday papers came out that he knew his idea had been taken up.

Although calls were put out in the press for the 17-year-old Chinese boy to come forward, he never did so publicly. He decided, however, to write again to Wilfred Kent Hughes, this time giving his full name and address, but asking that his name not be revealed. Several days later, Kent Hughes organised an Olympic offical to visit Wing’s father’s restaurant in Bourke Street, Melbourne, to present him with an Olympic medal as thanks.

For decades, the 17-year-old Chinese boy’s identity remained unknown. A young historian, Shane Cahill, found Wing’s second letter to Kent Hughes during postgraduate research into the Melbourne Olympics, and an article by sports journalist Harry Gordon in Time magazine in 1986 renewed the public search. Wing was eventually tracked down by a radio DJ in London. His contribution to the Olympics could finally be recognised – which it has been, not least by naming a street in the Sydney Olympic village after him!

Here are some links to more on the story, including interviews with John Ian Wing: