Five years ago I began an as-yet-uncompleted series of blogposts about the various iterations of the Certificate of Domicile and the Certificate Exempting from the Dictation Test.

The reason I didn’t write about the very first Certificate of Domicile issued in New South Wales was because it is held in a different series, NAA: SP11/6. I’ve written a bit about SP11/6 before — it’s an odd collections of Customs files that includes a bound volume with the earliest Certificates of Domicile, and the volume isn’t digitised.

On a more recent visit to the archives in Sydney, I therefore photographed the first certificate, which was issued a month after the Immigration Restriction Act came into force in January 1901. It can be found in NAA: SP11/6, Box 3.

The first NSW Certificate of Domicile was issued to 38-year-old Yau Foon (or Yaw Foon or Yow Foon?) on 3 February 1902 by NSW Collector of Customs Nicholas Lockyer. On the certificate ‘No. 1’ is handwritten in clear red letters at the top.

Yau Foon is described as being 5 foot 5 1/2 inches tall (without boots), of medium build, with dark hair and brown eyes. He had a small scar on the back of his right wrist. There is no space on the certificate for details such as nationality or birthplace.

Two photographs are attached to the front of the certificate, one showing Yau Foon front on, one side on. The photographs clearly show Yau Foon’s queue, wound and pinned to the top of his head. Note that on this earliest version of the Certificate of Domicile there appears to be specific spaces for two photographs.

The certificate is marked in red as being cancelled, which would have happened when Yau Foon returned from his trip to China. Customs officer Bragg has written that Yau Foon arrived on the S.S. Chingtu on 5 May 1904. 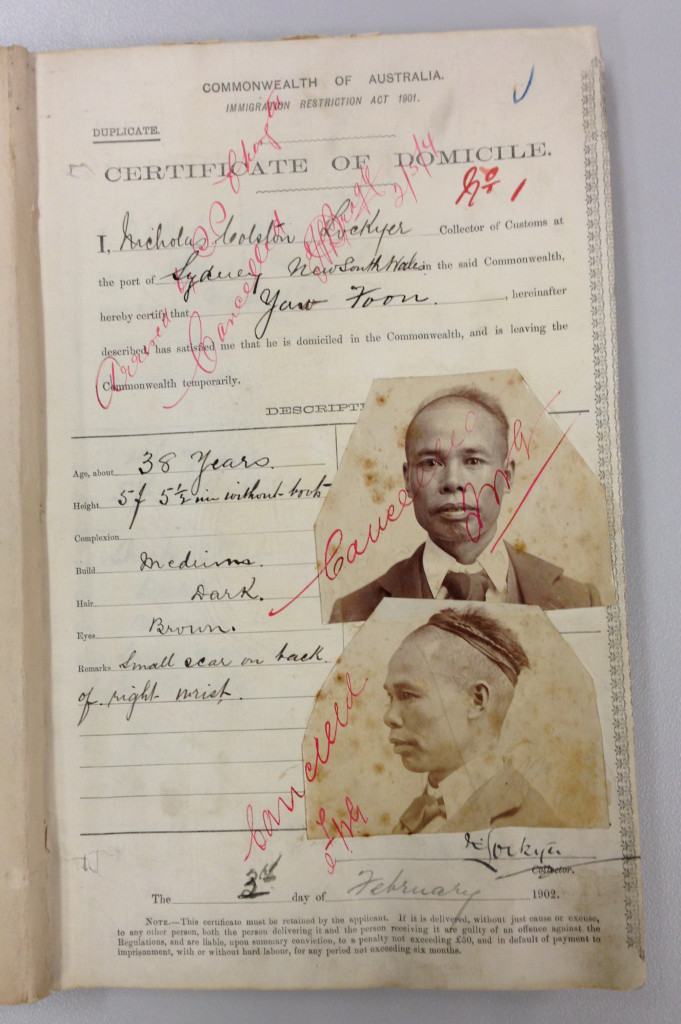