Over at discontents, Tim Sherratt has recently posted about a new project he and I are embarking on. Called ‘Invisible Australians: Living under the White Australia Policy’, the project aims to reveal something of the lives of the thousands of men, women and children who were affected by the racially-based immigration policy of early 20th-century Australia. (You might like to read Tim’s post.)

The Immigration Restriction Act, introduced in December 1901, was designed to limited the migration of ‘coloured’ people to Australia, but it (and other elements of the White Australia Policy) also had an affect on the lives of non-white, non-Indigenous Australians – people of Chinese, Japanese, Indian, Lebanese, Syrian, Afghan descent who were either born here, or who had already built lives here after migrating.

To administer the Immigration Restriction Act, government officials implemented an increasingly complex and structured system of tracking and documenting the movements of non-white people* as they travelled in and out of the country. This surveillance left an extraordinary body of records containing information about people who, according to the national myth of a ‘White Australia’, were not Australian at all. 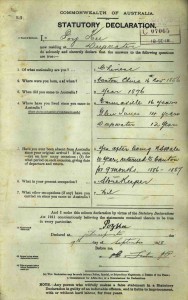 Tim and I hope that, starting with the documentary legacy of the Immigration Restriction Act, we can link together disparate fragments of information about non-white Australians to make their presence in early 20th-century Australia more visible. Many writings comment on how the White Australia Policy resulted in a reduction in Australia’s non-white population over the early decades of the century, particularly in the Chinese community – forgetting, it seems, that there were still thousands who just kept on living here, living their lives under the White Australia Policy.

Our first steps in the project are small ones. Tim is beginning work on a transcription tool that will enable the extraction of information from records already digitised by the National Archives of Australia. And I am going back and thinking about the records themselves, in part to provide Tim with details he needs to develop the transcription tool. I am also putting together a guide to researching individuals in the Immigration Restriction Act records from New South Wales (c.1902–1948) that are held in the National Archives’ Sydney office. 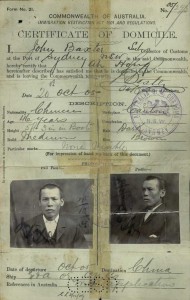 The lives revealed in the Immigration Restriction Act records are, for the most part, not big ones. They are those of market gardeners, labourers, hawkers, farmers, shopkeepers, cabinetmakers – as well as a wives and mothers and children. In many cases they are lives that are documented nowhere else. The documents I’ve included to illustrate this post are examples of two of the types of forms that we will be working with: Form 22, which was used to apply for an exemption from the dictation test, and Form 21, the Certificates of Domicile (CoD) and then Certificates Exempting from Dictation Test (CEDT) issued to those whose applications were successful. I’ll be posting more about these documents soon.

I have written elsewhere of the value of the records, and I marvel at the possibilities they offer for creating connections – between different groups of records, between the people documented in the records (parents, children, siblings, cousins, clansmen, neighbours) and between those ‘invisible Australians’ and their descendants today. Some days I’m a little overwhelmed by all the possibilities, but, for today at least, I’m happy that we’re making a start.

* In this post, and in our discussions of the project more generally, we use ‘non-white’ to refer to the people who crop up in the White Australia records because bureaucrats at the time considered them as something other than ‘white’. It’s not a perfect term, but it’s hard to come up with something that adequately covers all bases, particularly considering the instability of racial categorisation. Among those classified as ‘non-white’ were, for example, people of mixed race who had one white parent (usually their mother). Our use of ‘non-white’ does not include Indigenous Australians as they did not generally come under the restrictions of the White Australia Policy.