This post is really a bit of a fishing trip. I’m hoping to make contact with a Daniel Johnson, who contacted the Chinese Australian Historical Society a couple of years ago regarding Sun Johnson (or Sun Junchen). At the time Henry Chan told me of Daniel’s interest in finding out more about Sun Johnson, but didn’t pass on his contact details.

Frances Cogger and Sun Johnson are one of those couples I’ve done a bit of research into, but not much – they’ve always been on my list of people to follow up! Frances was only seventeen when they married in January 1899, and the couple had one son that I know of. They divorced in 1910. Below is their little son’s certificate exempting from the dictation test from 1907 (NAA: ST84/1, 1907/351-360). Note that he didn’t actually leave for China. 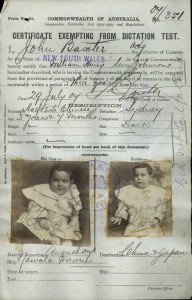 The career of Sun Johnson as editor of the first Chinese-language newspaper in Sydney, the Chinese Australian Herald, is discussed in various places including in CF Yong’s New Gold Mountain – but most recently in an article by Mei-Fen Kuo, ‘The Chinese Australian Herald and the shaping of a modern imagined Chinese community in 1890s colonial Sydney’, Chinese Southern Diaspora Studies, volume 2, 2008.

I have written briefly about Sun Johnson’s wonderful wordbook The Self-Educator, published in Sydney in around 1892, in my ‘Across the threshold: White women and Chinese hawkers in the white colonial imaginary’, Hecate, October 2002. James Hayes has also discussed the wordbook in more detail in ”’Good Morning Mrs Thompson!”: A Chinese-English word-book from 19th century Sydney’ in Paul Macgregor (ed.), Histories of the Chinese in Australasia and the South Pacific, Museum of Chinese Australian History, Melbourne, 1995.

If Daniel Johnson ever reads this, I’d love to hear from him! Just leave me a message below.