While in Hong Kong I’ve been reading, and really enjoying, Huifeng Shen’s book China’s Left-Behind Wives (NUS Press, Singapore, 2012). The book tells the story of women who stayed in China while their husbands migrated from Fujian province to Southeast Asia between the 1930s and 1950s.

Shen interviewed a number of these left-behind wives, all in their 80s or older, and their oral history testimonies provide a poignant insight into some of the most intimate aspects of their lives — the sorts of things that I struggle to uncover in my own research. Although the women in Shen’s book are from Fujian not Guangdong, and their husbands migrated to Southeast Asia not Australia, her work rings very true with what I know of the lives of wives of Chinese men in Australia. One of the most fascinating things for me, who approaches the subject from an Australian perspective, is seeing the Chinese side of story, particularly where it comes to the question of first and second marriages.

My research has uncovered the unhappiness that many Australian wives felt on discovering that their Chinese husbands had wives, and sometimes children, in China, and the difficulties Australian wives faced when they travelled to China with their husbands. Shen’s research shows that overseas marriages and overseas families created unhappiness, and hardships, for Chinese wives too. Shen notes that — as the result of often long-term separation from their husbands and feelings of fear, jealousy, hurt and betrayal — ‘many fankeshen [left-behind wives] hated the second wives of their husbands, especially the fanpo [‘barbarian’ foreign women], even if they never met them’ (Shen 2012, p. 100).

Some years ago, when I was in a ‘Cuban’ village in southwest Taishan, I was told a story about foreign wives. The story went that foreign wives of Chinese men would give their husbands a dose of poison before they made a return visit to China, a poison that could be reversed only if the man returned overseas to his foreign wife for the antidote within a particular time. My informant stated that this was the cause of the death of his uncle, who had been a laundryman in Cuba in the 1920s and was known to have had a Cuban wife.

I thought this might have been a local fable until I came across an article in the Tung Wah News from 1899 that told a similar story.

I was very interested then to read in China’s Left-Behind Wives that the emigrant communities of Quanzhou, Fujian, also ‘believed that fanpo sometimes … cast spells or hexes on the male migrants who married them’ (Shen 2012, p. 101 n. 58). Furthermore:

Wives who visited their husbands overseas were very careful when they met an overseas wife, believing that the woman might cast spells that would make them sick or insane, or cause them to die. Wives were particularly wary of food and drink provided by an overseas wife, suspecting something harmful might have been added. Hong Q [a left-behind wife interviewed by Shen] said she experienced stomach pain after eating with her husband when she visited him in the Philippines. She did not eat any food prepared by the overseas wife, but she believed that the woman put a spell on her by touching her hand three times (Shen 2012, pp. 100-101).

I came across China’s Left-Behind Wives by accident in the bookshop here in Tsim Sha Tsui, but I’d suggest you seek it out a bit more proactively. As Shen notes in her conclusion, ‘the story of the left-behind wives is not merely an appendix to male migration history but a subject worthy of study in its own right, and an integral part of the history of women, the history of migration, and the history of China’ (Shen 2012, p. 216). Here, here. 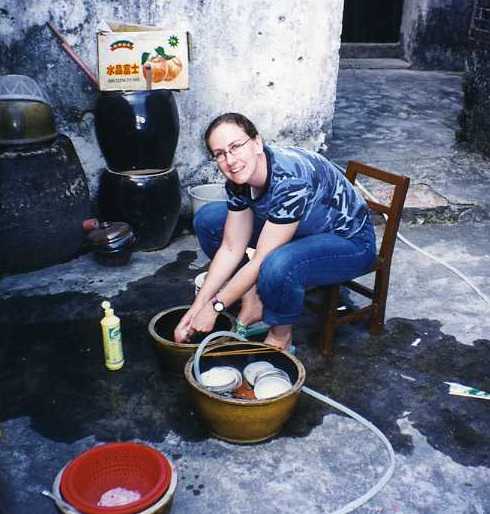