Names can be one of the trickiest parts of researching Chinese Australian history. They consistently seem to puzzle and confuse people – there’s the way that given names became surnames, the way that spellings changed over time and in different places and the way that ‘Ah’ appears everywhere.

I’ve written before about some of the challenges that come with researching Chinese names in Australian records. There are tricks you can learn, but my main piece of advice would be to be creative in your searching and in your spelling. I’ve recently been tracking a man whose name I first came upon as Mum Shou Pac—but he’s also turned up as Man Sue Bach, John Ah Shue Bach, John Ah Shue and John a Shue. All of these variations appeared in records from the same year and when he was living in the same place! I am yet to track him before that one year, and my stumbling block is knowing what name his baptism and marriage and the births of his children might be listed under.

I’ve heard some people say that the irregularity of spelling of Chinese names in early Australian records was the result of the disregard that white residents felt for Chinese residents—perhaps even that it was the result of racist attitudes. I have a slightly different take on it, as illustrated by discussions during a court case from South Australia in 1845.

In November that year, a young man named James Coyle was charged with, and then found guilty of, stealing the watch of a Chinese man named John Pegue at Gawler. John Pegue gave evidence at Coyle’s trial, and the following exchange took place when he was being cross-examined by Mr Poulden, the lawyer:

John Pegue: … I am no scholar; I do not know how to spell my name; I call it Pegue.

Mr Poulden: Do you know the letters in your name? Can you write?

Mr Poulden noted that in the indictment the name was spelled with two ‘g’s’ while in the deposition it was not. The Advocate-General thought the name sounded like it should have two ‘g’s’, and apparently the police at Gawler called him ‘Piggy’ (it doesn’t seem that this was necessarily meant in a derogatory way, just that it was how the name sounded to them). The judge noted all this ‘only shows that different people spell different ways.’

I think there are a couple of things going on here—things that happened over and over again as Chinese residents and white residents met and interacted in the colonies—things that influenced the way that many thousands of Chinese names were recorded in Australian records.

First, although it seems that John Pegue was fluent enough in English to give evidence, he was not literate. He did not know the alphabet. He could not even write his name in Chinese. He didn’t then know how his name should or could be spelled in English. There was no ‘right spelling’ to be written down.

Second, those who were recording his name in English couldn’t decide among themselves what spelling best represented the sounds of Pegue’s name. Was it represented better with a single ‘g’, or two ‘g’s’? Because Chinese names were written down phonetically, the way that English-speakers recorded them could be influenced by their own background, dialect, accent and level of literacy.

I’m not saying that cultural ignorance and misunderstanding had no part in the curious ways that Chinese names were recorded in colonial Australia. But when you explore the mechanics of how those names were written down, and about the personal interactions and exchanges they involved, the situation seems so much more complex and interesting than simple ignorance.

I’d love to hear other stories of strange renderings of Chinese Australian names. 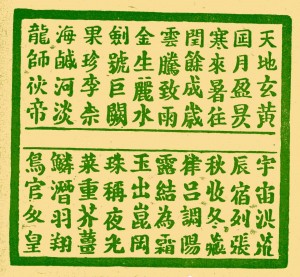 When I studied Mandarin at Sydney University in the late 1990s, everyone spent their first year learning to read and write traditional characters. At the end of that year, we could choose which way we wanted to go. Looking back at my textbooks, it would seem that I went down the ‘traditional’ road. Well, for six more months at least. After that I went to Guangzhou to study at Zhong Da (Sun Yat-sen University), and the rest, as they say, is history.

I’m very glad, though, that I did have that initial basic education with traditional characters. Just today, for instance, I’ve been looking at some Victorian naturalisation applications dating from the 1850s and 1860s on which the Chinese gentlemen have signed their names, amazingly, in characters. (It’s all a bit exciting when one comes across a name in characters.) My Chinese is pretty rusty, but at least I’m familiar enough with old-form characters to be able to look them up!

I recently did some investigations into Chinese schools in Canberra, with the thought of getting my nearly 4-year-old daughter started on the path to Chinese literacy. The one school that teaches traditional characters has had so little interest that they are no longer putting on new classes. The biggest and most active school goes with simplified characters, although they say they do give the students chances to become familiar with traditional ones. I think that’s a bit of a shame (much like I think it’s a shame that my daughter’s going to end up speaking Mandarin, if anything, rather than Cantonese or dialect… But I digress!)

So what about bringing traditional characters back? Of course, in some places they never went away. (Another good reason for knowing traditional characters is to be able to make sense of noodle restaurant menus in Hong Kong when one’s Mandarin is ignored and one’s Cantonese is unintelligible.) But seriously, the latest issue of Geremie Barmé’s China Heritage Quarterly (no. 17, March 2009) has a really interesting article about moves to reintroduce traditional characters. Have a look at The Chinese Character—no simple matter.