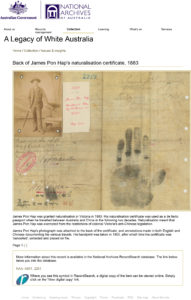 en years ago, in June 2009, a paper of mine about White Australia records and the Poon Gooey family was published on the National Archives website. I had presented the paper at the Fourth International Conference of Institutes and Libraries for Chinese Overseas Studies at Jinan University in Guangzhou, China, on 10 May 2009. I was then working in the web team at the National Archives and so we put my paper up online, with links to images of documents and to the original archival records, which were all digitised in RecordSearch.

Using the story of Poon Gooey and his family as a case study, the paper discussed the National Archives’ early 20th-century records on Chinese Australians, particularly those created in the administration of the White Australia Policy. The records document many aspects of the lives of Chinese Australians, including immigration and travel, business enterprises, political activities and community life. Publications and finding aids, descriptive work and digitisation projects over the years have made the records easier to access and hopefully encourage their use.

The records are a legacy of the discrimination and marginalisation of the White Australia years, but they can be used by researchers today to recover the lives of Chinese Australians in the past, and also to provide a more nuanced understanding of the contradictions and complications of Australia’s response to its Chinese population.

With the NAA website currently being redeveloped (and the online fate of my paper uncertain), I thought I’d revisit the original version of my paper, which can be found in the Wayback Machine at: https://web.archive.org/web/20090627064642/http://naa.gov.au/collection/issues/bagnall-2009/index.aspx

You can also download a full version of the paper, including images (pdf, 15.1mb): A Legacy of White Australia by Kate Bagnall, 2009