In October 1913 Secretary of the Department of External Affairs, Atlee Hunt, sent a circular to the state Customs departments asking if they kept records of Chinese Australians who used their birth certificates as identity papers when travelling overseas.

Queensland already kept such a register, and Hunt felt that:

An example of the early difficulties that both Chinese Australians and government officials had with using birth certificates as identification can be found in the case of Fred Hong See (see NAA: BP342/1, 13021/357/1903). Fred was born in Sydney in 1885 to Chinese parents who, when he was very young, took their son back to China. Fred’s father later died and, in 1903, Fred returned to live with other relatives in Sydney. When he arrived, Customs officer J.T.T. Donohoe doubted his identity and would not allow him to land. Donohoe’s suspicions were based on the fact that Fred could not speak any English and his feeling that Fred looked older than the age stated on the birth certificate he presented.

Fred was quickly sent on his way back to China, and it was only through the threat of legal action by his well-respected relatives in Sydney and their payment of a deposit of £100 that Fred was permitted to stop at Brisbane for re-examination. With evidence provided by Fred’s relatives, the Brisbane Collector of Customs, W.H. Irving, was satisfied that he was, in fact, telling the truth. After Atlee Hunt’s approval, Fred was allowed to stay.

This is the copy of Fred Hong See’s birth certificate that he presented to officials on his return to Australia in 1903. It can be found with other correspondence about the case in NAA: BP342/1, 13021/357/1903.

In the decade after the introduction of the Immigration Restriction Act, the processes for its administration continued to be refined and tightened, primarily to prevent the fraudulent entry of Chinese into Australia. Hunt’s request for the keeping of birth certificate registers came about from a concern that ‘as other channels of fraudulent entry are being blocked, the Chinese will make a determined effort to utilize birth certificates to that end.’

His Customs circular of 1913 set out the details that Customs officers should record to enable correct identification on a person’s return to Australia:

The Collectors of Customs responded thus:

It became the practice for birth certificates to be endorsed by Customs officials on a person’s departure. This usually included taking a handprint and attaching a photograph, as well as recording the details in a register. Some people also went through the formality of applying for a CEDT.

To my knowledge, only two of the birth certificate registers still exist, those for Queensland and New South Wales. The Queensland register is held in the Brisbane office of the National Archives, and a digital copy is available through RecordSearch:

The first volume, of 16 double pages, has suffered flood damage and can be difficult to read in parts. The second volume, which has 23 double pages, is much more legible. A sample page from the second volume is shown below – this is a left-hand page, with the remainder of the details about each person completed on the corresponding right-hand page. 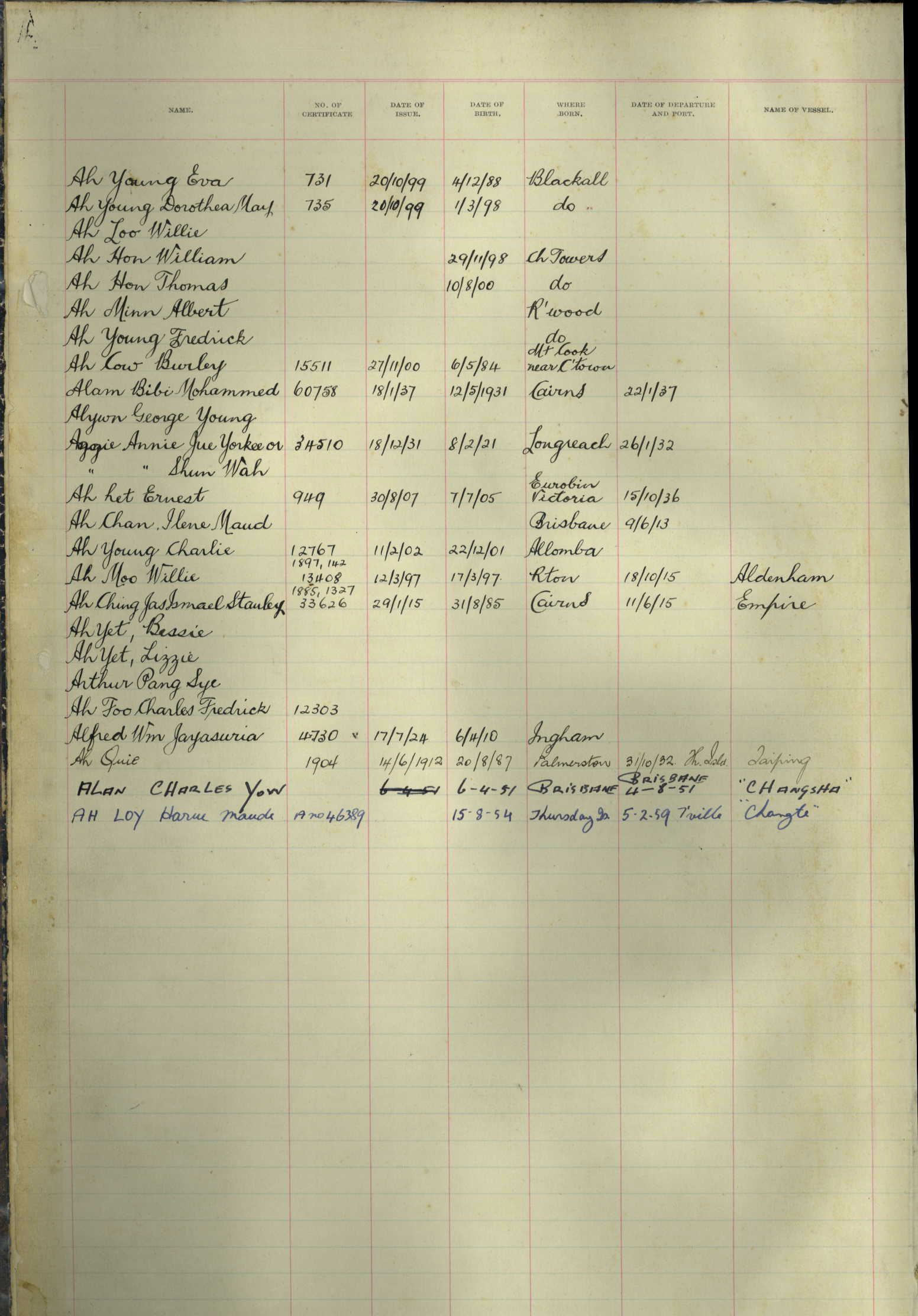 The single register for New South Wales, held in the National Archives’ Sydney office, is more substantial than those for Queensland, demonstrating the greater amount of travel that occurred from Sydney. The register contains around 150 double pages and includes an alphabetical index at the front. The entries date from 1904 to 1962; those before 1913 were presumably copied from records elsewhere. It is also fragile and difficult to read in places, but it has recently also been digitised and made available through RecordSearch:

The page reproduced below is a left-hand page, with further details about the travels of each person available on the corresponding right-hand page. 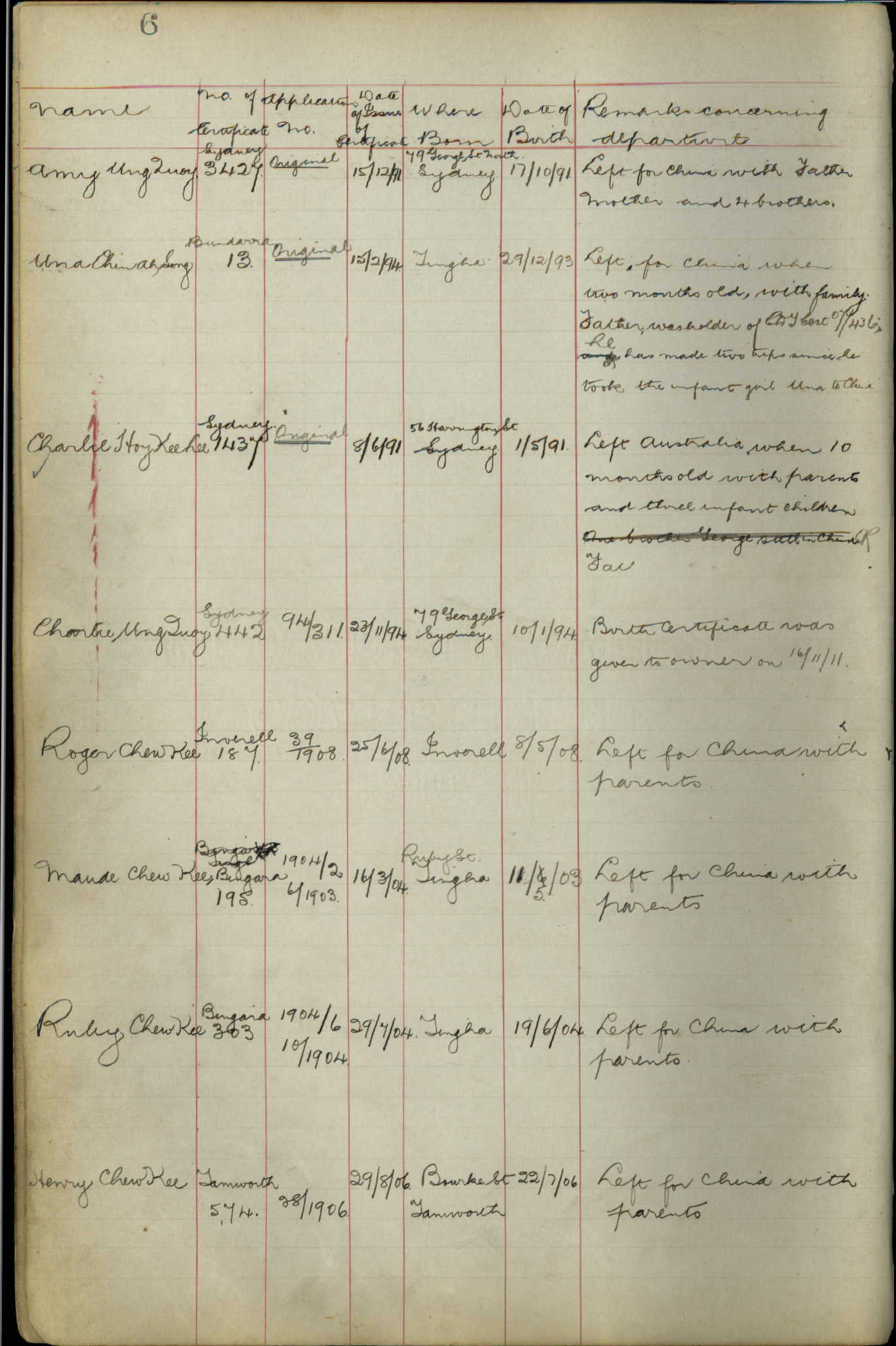 Making use of the registers

These registers are valuable sources of information about Chinese Australian families in Queensland and New South Wales, and can provide missing pieces of information for people who did not apply for CEDTs when they travelled overseas (which many Australian-born Chinese did not).

Having them digitised is great, especially for those of us who can’t easily get to the Brisbane or Sydney reading rooms – but what would be even more useful is if the information contained in the registers was in a form that could be searched and sorted. I’m working on a bigger project relating to Chinese families in New South Wales, based around a database of information sourced from marriage and birth records up to 1918. I’m part-way into transcribing relevant details from the published BDM indexes with 1000 entries (out of an estimated 3000–4000) in the database so far!

The information found in the birth certificate registers obviously relates very strongly to this, so I have another crazy plan to also transcribe the information held in the Sydney register. It’s not going to be a quick job – and it’s one that could easily be shared since the New South Wales register is online. So, if you happen to have some spare time and don’t mind deciphering old handwriting, I’d love to hear from you!